To be the most trusted leader in providing world-class Supply Chain Solutions.

To provide our customers with the absolute best single-source solution for warehousing, co-packing, & transportation - existing as an integral part of our customers strategy by being the absolute most cost effective & value creating business partner - we believe in delivering a disciplined culture of trust, safety, & customer-centric service. 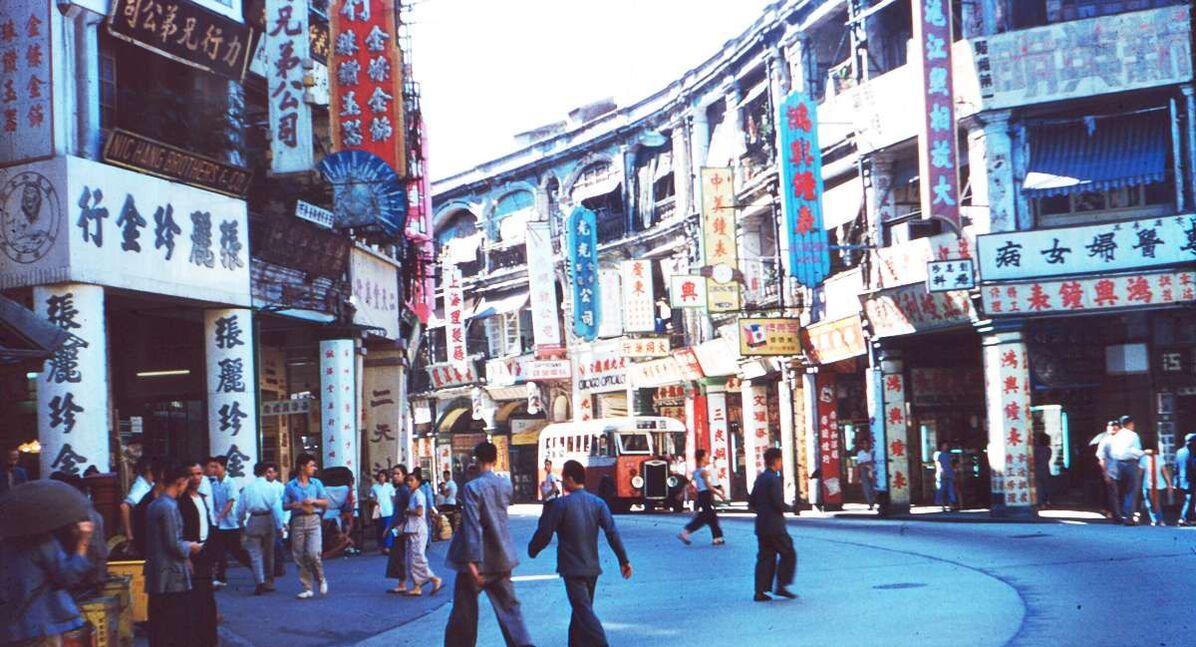 Mr. Perry Wong immigrated to Vancouver, BC, Canada from Hong Kong in February of 1979 with no money to his name, but was well equipped with a hard working attitude and a dream to build a better life in North America. February of 1979, was also the month of the Chinese new year, so it was the perfect timing for new beginnings at the start of a new year. During the 1980s, the largest wave of immigration to Canada from Hong Kong occurred due chiefly to the future transfer of sovereignty of Hong Kong in the 1990s to China. ​ 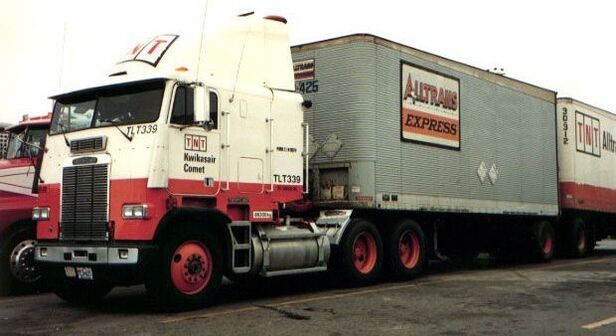 Mr. Wong began working for TNT Alltrans Express as a warehouse-man, moving boxes and operating material handling equipment on the cross-dock. At the time TNT Alltrans Express was one of the top warehousing and trucking companies in Canada with distribution terminals across the nation.

​Eventually Perry, moved in to the office working in the operations as a dispatcher and warehouse coordinator. ​ 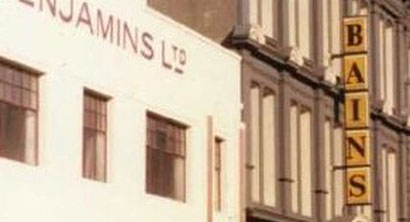 In year 1989, TNT Alltrans Express was on its way to going out of business. Primarily due to having difficulties adjusting to government deregulation of the logistics industry in the 1980s. This was the same year Mr. Wong decided to open up his own warehousing business in Vancouver BC. The first location was opened in east Vancouver, a 7,000 square foot facility with 2 dock level loading bays. Mr. Wong opened it with values that were built based on his experience of what he learned in the past. Number one is that he would ensure to build a company that was deep versus wide. This meant to favour growing the company's infrastructure deeper and narrowing its niche focus on warehousing.  Stable, steady, and sustainable growth was the mantra Mr. Wong was known to lead by. Continuously strengthening and building an the foundation of the company through technology, people, and processes was just another day at 18 Wheels. By doing this it allowed the company to fulfill its mission of providing the absolute best experience to it's customers possible. 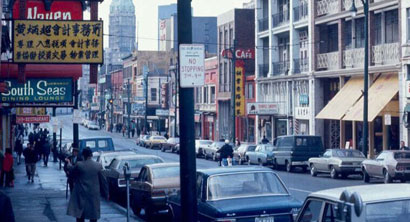 ​Due to the warehouse's close proximity to the Vancouver China town and Mr. Wong's roots in the Chinese community, the business attracted mostly importers of Asian foods and beverages. Mr. Wong would regularly knock of every businesses door in China town to find out how he could help them support their businesses. 18 Wheels started to become well known in the local china town community, sometimes even giving credit to customers for over 1 year to help them. This meant Mr. Wong had to live on a tight budget personally, but he knew if he could help enough people reach their goals, one day his own goals would be reached as well. 18 Wheels stored and distributed everything from soft drink beverages and biscuits, to container loads of bamboo sweeping brooms. By 1991 the business was servicing over 25 customers and required to expand its footprint, so it leased extra space from the building's landlord to add an additional 9,000 square feet and 1 extra dock. 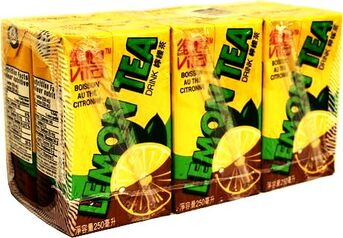 By the mid 1990's the company started to focus primary on helping its customers repackage their goods for the Canadian domestic market. Primarily importers of ethnic juices would ship in container loads of different flavors of beverages and 18 Wheels would use physical labor to create variety packs for the consumer market. At this time, the company began to invest in to what is now known as contract-packaging equipment or co-packing equipment. 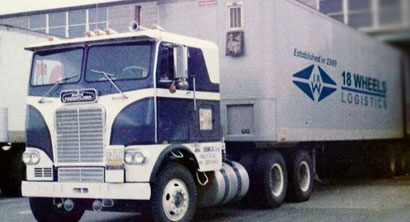 By 2001, 18 Wheels had outgrown its facility on Skeena and needed to take on additional warehouse space. The company leased a secondary location on 3438 East Broadway Street Vancouver. A unique location that was underneath a Chinese restaurant and frozen food supplier. This location added 25,000 square feet to the 18 Wheels foot print and provided a tasty place for dim-sum where Mr. Wong was regularly seen. 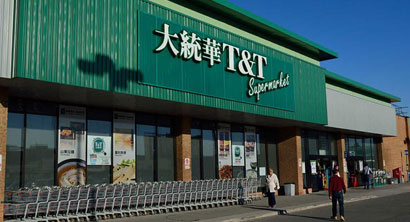 18 Wheels landed its largest customer, T&T Supermarket a company started in 1993 by a Taiwanese entrepreneur Cindy Lee, who named the business after her 2 daughters Tina and Tiffany. T&T required extra warehousing, contract packaging, and distribution services for it's growing business, which now does over $500 million in revenue across Canada and was recently purchased by the Loblaw Grocery Group of Companies. This new partnership grew the business of 18 Wheels by over 25 percent.

2010 - Engineering an even Stronger Infrastructure

With deep infrastructure investment including information technology, financial organizing, human resource strengthening, and widening management bandwidth, 18 Wheels grew it's customer base through 100% word of mouth referrals requiring it to add an additional 115,000 square feet of distribution space. The company began to attract industries not only in beverage and food, but also appliances, electronics, and building supplies. 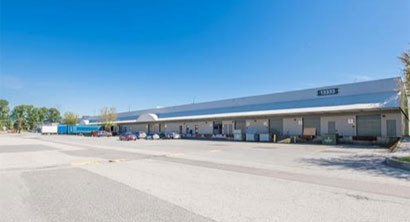 Adrian Wen was promoted to the Chief Executive Officer of 18 Wheels. Adrian came from a strong background in distribution, holding a degree in B.Comm Business Management from Royal Rhodes University and previously running import and export operations for Lulu-lemon Athletics. With strong leadership intuition Adrian successfully directed the company to focus on its niche of a one-stop solution for contract-packaging, warehousing, and transportation services, narrowing its market segment to CPG beverage, alcohol, electronics, and building materials. The company grew to add an additional 200,000 square feet with an additional facility on Vulcan Way in Richmond BC. 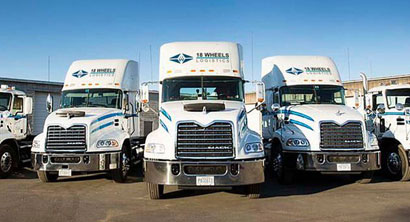 Michael Kotendzhi was promoted to Chief Operating Officer at the beginning of 2012, equipped with a degree in Logistics from the University of British Columbia Sauder School of Business and a background in logistics from XPO Logistics (formally Kelron Logistics) North Americas largest contract warehousing provider. Michael began to develop 18 Wheels' transportation solution, effectively utilizing the sister company's vehicle fleet, and building a transportation supply-chain network across North America from coast to coast. By 2012 the warehousing foot print grew to over 300,000 square feet of distribution space.

Western Canada expansion. At the start of 2013 the Alberta economy was still on a boom, 18 Wheels opened its first facility in south east Calgary, Alberta within minutes to the Calgary Canadian Pacific Railway Terminal. At this time the company grew to over 425,000 square feet of logistics space. Even though Alberta has been through an oil downturn over the past few years, the 18 Wheels business has durably progressed with an upward trajectory due to the stable food and beverage market it focuses on. 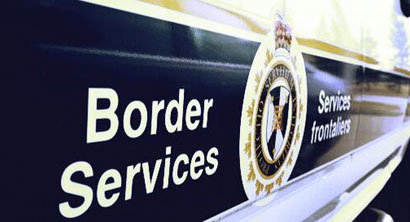 In addition to the domestic alcoholic products 18 Wheels was already distributing for, 18 Wheels acquired a secondary import alcohol license to allow it to store, distribute, and transport alcoholic products imported from Europe, Asia, Mexico, and South America. This action further deepened the company's niche in the beverage and alcohol industry. 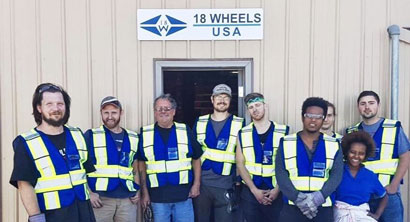 Due to customer demand, 18 Wheels opened another new facility in Washington, USA to provide a contract logistics warehouse facility to key customers in the food and beverage industry. 2017, was the same year that Richard Freedhoff, was promoted to a Vice President position at 18 Wheels. Richard an experienced business executive with over 28 years experience in commerce, utilized his background in previous positions with Sony Canada, General Electric, SupremeX, and REMCO to deepen 18 Wheels' foundation to support the 600,000 square feet of warehousing space 18 Wheels was running in 2017. 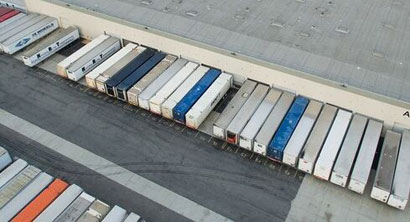 In 2019, Meng Lai was promoted to Chief Financial Officer.

Meng had over 20 years’ experience, graduated from the Sauder School of Business specializing in Finance & Management, held CPA, CMA, and CFA designations, and served as Vice President for the Bank of Tokyo MUFJ, Senior Manager of Advisory Value Creation for Deloitte, Goldman Sachs Hong Kong, and HSBC Canada. Utilizing his experience and expertise, Meng helped to lead the company's financial infrastructure initiatives allowing 18 Wheels to continue with conservative, steady, and sustainable growth to over 650,000 square feet in Vancouver, Calgary, and Washington, plus 400,000 square feet in partner facilities in Toronto, Los Angeles, Edmonton, Nanaimo, and Kelowna. 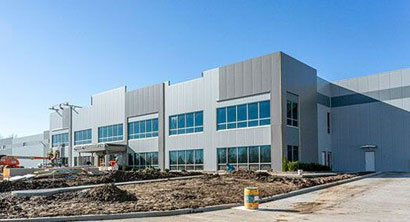 The 18 Wheels group completed its 6th industrial warehouse purchase in Vancouver BC Canada (GVRD). 18 Wheels' philosophy has always been to make decisions based on the long term always for our customers, people, and company.

Owning the buildings we operate out of helps to secure deeper foundations for our customers and business in the long term.

18 Wheels invested substantially towards updating and modernizing our internal co-packing equipment and industrial warehouse space in Vancouver BC. This investment was made to upgrade our previous equipment and replace the production lines with brand new state of the art technology and more effective production lines that can handle 8 times more of the throughput. This increase in productivity was driven by purchasing machines that automated more of the processes involved in co-packing.

The Future - Deeper is Better than Wider 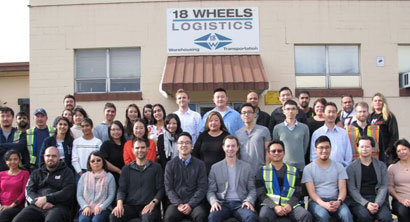 18 Wheels continues to move ahead deeply instead of widely, focusing on providing the absolute best customer experience possible. Making sure we are excellent at what we are doing now, before taking a step forward is instilled in the values of the business, ever since Mr. Wong started it in 1989. We've been around now for over 32 years and we have taken an approach of a conservative, steady, and stable ​growth path versus a fast growth path which ensures we remain durable and sustainable during all business and economic environments. Focusing on constantly re-engineering and building the absolute best foundation through technology, processes, & people first before taking on further growth allows 18 Wheels to provide superior service. This is what makes it possible for the company to continue to scale through word of mouth, because our customers are our best advocates. ​