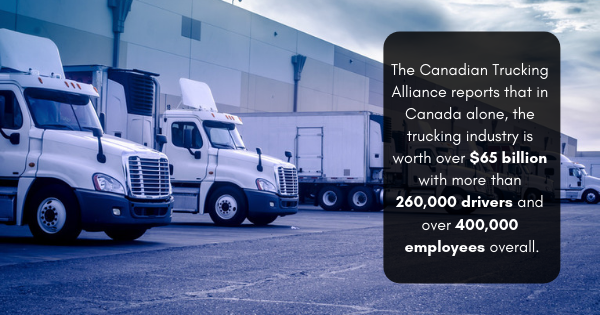 The Canadian trucking industry is facing a problem. Despite the fact that it’s valued at over $65 billion and employs more than 260,000 drivers, only a startling 3% of those are women. Due to the fact that trucking has historically been associated with men, the few women who do work in the heavy haul and logistics business have decided something needs to change.

“We need to get into the schools and colleges to get more women and girls interested,” said Shelley Uvanile-Hesch, CEO of the Women’s Trucking Federation of Canada and carrier driver herself, during the annual Women With Drive conference near Toronto on March 7. Uvanile-Hesch believes that trucking offers a lucrative option compared to fast food work and other low-paying jobs.

Container trucking companies have been struggling to get drivers interested in general, but this gender imbalance reveals a deeper problem. Uvanile-Hesch has been in logistics for a while — long enough to see how attitudes toward women have improved since she started trucking — but knows that the situation is far from ideal. Although one in 10 Canadian millennials have stated they’d consider a career as a trucker, women continue to face sexual harassment and a general feeling of danger: 71% of millennial women believe trucking is unsafe.

David Coletto, CEO of Abacus Data, has been researching the demographic for Trucking HR (an organization devoted to human resources issues in the Canadian trucking industry). He claims that the logistics industry needs to change its image; effective messaging that emphasizes the modernization of the trucking business as a whole could generate more millennial candidates and women drivers, he said, stating that there’s “a lot of opportunity.”

Unfortunately, it isn’t only women that the trucking industry needs right now. Studies have revealed that Canada — which relies heavily on container trucking to ship goods and products — will be short a staggering 35,000 drivers by 2020. There are a number of reform plans and investments being made in an attempt to encourage younger people to the field, including an unlimited income potential. Hopefully, as the nation works to bring more people into the fold, women will turn up just as much as men.