The Robots are Coming: How Automation is Revolutionizing 3PL 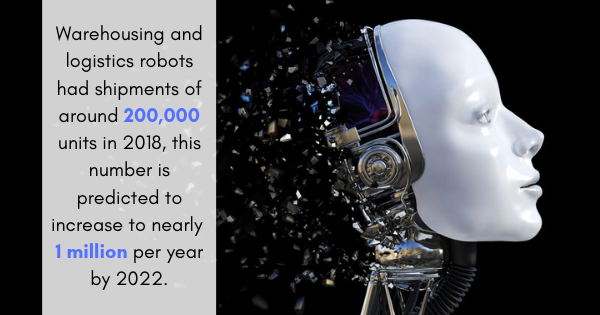 From customer service, to agriculture, to the financial sector, automation and AI are constantly disrupting industries and improving efficiency. The integration of automation into various sectors comes with a number of crucial improvements, including:

It only follows that these innovations are moving to the packaging and shipping industry as well — today, container trucking companies in Vancouver BC and all over the world are beginning to integrate the new technology into the workflow.

The Projections By analyzing current data, Tractica has forecasted massive growth in revenue brought in by warehousing and logistics robots in the years to come. While these robots had shipments of around 200,000 units in 2018, this number is predicted to increase to nearly 1 million per year by 2022. This will be accompanied by revenue increases from around $8 billion in 2018 to over $30 billion a mere five years later

The Primary Concern When it comes to utilizing automation across the supply chain, commercial logistics companies have one main concern which stands above all others: is it worth it? While it certainly remains to be seen how the return on investment in these technologies will play out over time, one thing is certain — things are moving in the right direction. Automated systems are growing increasingly versatile, making it less and less likely that they will grow obsolete near-term. To combat this concern, companies are designing automation technology that is scalable, rendering it useful for an ever-increasing variety of applications.

A Possible Future: Driverless Vehicles With roughly two-thirds of all trade between the United States and Canada carried out by truck, the implications for driverless vehicles are far-reaching. Driverless trucks could reduce accidents, improve fuel efficiency, and decrease labor costs. A study from Indiana University suggested that over 90% of crashes on the road are due to human error rather than external causes. Autonomous vehicles driven via a complex array of sensors, state-of-the-art GPS, and extremely advanced computing software would most likely reduce accidents by a very significant margin.

Whatever direction the industry may take, one thing is for certain: 18 Wheels Logistics will be at the top of the game.