Georgian Tree Frog Hitches Ride On Cargo Truck, Makes It All The Way To Canada 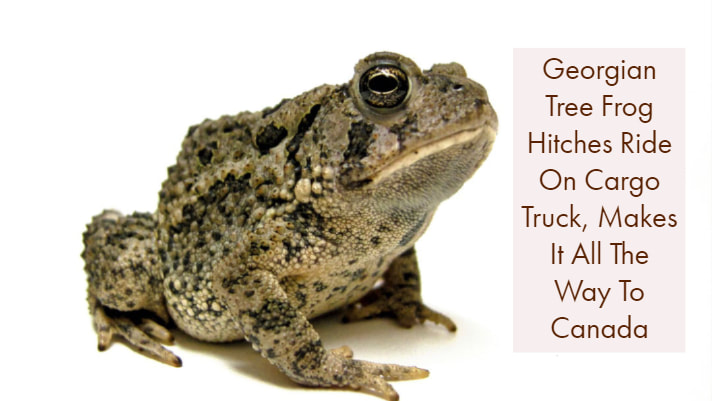 Container trucking companies are no stranger to Canada or the United States; approximately two-thirds of Canada-US trade is moved by truck, ensuring that both nations are able to thrive and prosper. Though heavy haul container trucking companies are mostly associated with cargo that doesn’t breathe and isn’t living (although food grade logistics treads that line very carefully), that was not the case on one cargo truck’s journey last month.

The Cope’s gray tree frog, a one- to two-inch-long amphibian rarely seen on the ground, usually stays within a few miles of where it was born. For one jet-setting Georgian Cope’s gray tree frog, however, this fact was shattered; the amphibian-in-question completed a roughly 2,000-mile journey to Canada and back over two months. Originating in Sandersville, Georgia (a central city of 5,500), the frog apparently hitched a ride on the back of a carrier vehicle where it went unnoticed until the truck arrived just outside of Toronto.

If you thought the logistics regarding the container trucking industry were a nightmare, try being an animal outside of its national residence; the truck driver’s girlfriend — after he posted a picture of the amphibian to Facebook — contacted the Toronto Wildlife Centre (TWC), where she was then asked to bring the creature in an attempt to get him home.
“The paperwork is a living nightmare,” said TWC executive director Nathalie Karvonen, although the TWC does have experience returning wayward wildlife across the U.S. border. Apparently, it once took months to send a snake back to Arkansas, and the center also currently has a raccoon that gave birth hidden on its 16-day trip from California.

Considering the fact that the Cope’s gray tree frog was accidentally relocated 1,000 miles north of its original habitat, it’s fortunate they were able to return the creature to its home; it would not have fared well in the Canadian winter.

After a brief drive and cargo flight, the frog is now resting at Atlanta’s Chattahoochee Nature Center (CNC), where staff are monitoring his health before releasing him into the wild in Sandersville.